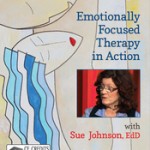 Dr. Sue Johnson came onto the family therapy radar screen in the early 1980s when she, along with Les Greenberg, developed a short-term, structured therapeutic approach to working with couples which emphasized emotion as the key organizer of behavior patterns and thus intimacy. Johnson’s concept was “radical” especially in the heyday of Salvador Minuchin and Jay Haley. Yet, not only did Johnson formulate a theory that combined Carl Rogers and John Bowlby’s ideas along with systemic theory, she did extensive research on her model as well – Emotionally Focused Therapy (EFT).

The first disc of this two-part film features an interview with Johnson and the producer of the video, Victor Yalom. Johnson emphasizes adult attachment theory and how EFT allows people to send clear emotional signals to their partners. Such articulation is the opposite of shutting down or becoming angry and creates a strong bond between partners. The result is not only a more secure relationship between individuals in a couple relationship, but greater independence of each individual.

Johnson states that the EFT therapist must first look at the “dance” of couples stuck in non-productivity, and especially the emotional consequences of their actions. A main focus of the therapist is to help couples understand their emotions and change them so they can ask for what they need and negative cycles of communication can be broken while positive ones are built. Johnson emphasizes the collaborative nature of EFT and its three stages: 1) deescalation, 2) creation (of a positive cycle of emotional involvement), and 3) consolidation. She stresses that there are “softer emotions” behind harsher feelings, such as anger (e.g., hurt) and couples need to access these softer feelings. The final part of the first disc involves Johnson consulting with a family counselor dealing with a couple who are reactive, angry, anxious, controlling, withdrawn and estranged from each other. She has a collaborative and humorous yet serious style of consultation and like Virginia Satir is an excellent communicator. Her points are clear, insightful and well taken. The second disc in this set involves Johnson working directly as an EFT therapist with the couple she earlier consulted. She does voiceovers to explain what she is doing. This aspect of the video adds significantly to the viewer’s learning as does the final wrap-up Johnson does with Yalom on what happened in the session. Johnson shows in her couples counseling the essence of EFT, especially the techniques of reframing, amplifying, empathy and enactment.

Overall, Emotionally Focused Therapy in Action is a well-produced, informative and humanizing view into an extremely important couple’s treatment that has research proven results. Its major drawback is its greatest strength: it is long (3 hours, 33 minutes). Its thoroughness gives Johnson an opportunity to demonstrate her approach at its best. Yet because of length, this production is not appropriate for use in most academic settings unless it is used outside the classroom and later discussed or critiqued.