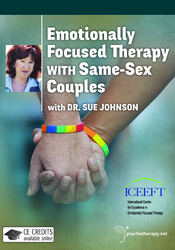 Since its inception in the early 1980s, Emotionally Focused Therapy (EFT) has given therapists a fresh approach for couples counseling. Developed by Dr. Sue Johnson (professor emerita at the University of Ottawa and founder of the International Centre for Excellence in Emotionally Focused Therapy [ICEEFT]) and Dr. Les Greenberg (professor of psychology at York University, Toronto), EFT focuses on the attachment bond between the couple and looks to understand how surface emotions expressed in conflict (what Johnson describes as dreadful dances of negative interactions) are often disguised cries for deeper understanding and a desire for greater intimacy. As the name suggests, this form of therapy focuses on emotions, not cognitions. By untangling the surface emotions and their underlying meaning, the counselor can help the couple identify each step they take in conflicts, deescalate conflicts, identify unmet attachment needs, and restructure interactions so that they learn to bond and meet each other’s deepest needs. The result is a safe and secure attachment bond.

For the most part, EFT has been used to help heterosexual couples improve their relationships. But as the landscape of societal and cultural norms change, counselors can expect to see more gay, lesbian and transgendered couples seeking guidance for relationship struggles. To help counselors cope with the growing tide of same-sex couples seeking services, ICEEFT and Psychotherapy.net present Emotionally Focused Therapy with Same-Sex Couples. This useful video shows Dr. Johnson in action with two same-sex couples (one male couple and one female couple) who are in different stages of reestablishing their damaged attachment bonds. The demonstrations are bookended by conversations between Johnson and each couple’s regular counselor. The video concludes with a very useful conversation in which Johnson and three other counselors discuss the particular nuances of working with same-sex couples.

This video is instructive on two counts. First, for the EFT novice, it shows the master in action. Johnson ably demonstrates two of the three primary stages of EFT—deescalating conflict and restructuring the dance of conflict so that each partner can begin to meet the other’s attachment needs. The stages are the same whether the couple is heterosexual or same-sex, and it is illuminating to watch Johnson review the stages and then help clients reach the stages. In addition, this video also offers insight into the particular issues of same-sex counseling. Counselors who are new to working with same-sex couples—especially heterosexual counselors—should be aware that gay and lesbian couples bring not only the usual conflicts and foibles of relationships into therapy, but  also a history of societal indifference and sometimes familial disapproval. As Johnson and her colleagues note, gay and lesbian partners often are even more disconnected from their attachment needs than their heterosexual counterparts. A lifetime of shaming, disapproval from family and friends, and repressing natural desires can adversely affect a person’s ability to fully trust another. Often gay and lesbian youth lack a secure attachment figure—someone to understand and offer warm support—and the lack of this bond makes future relationships tenuous. Johnson encourages the viewer to speak openly about issues of sexuality with same-sex couples, to avoid assumptions about their experiences and to make contact with the trauma each partner may have had when coming out. Attachment can be hard for straight couples, Johnson says, and building secure attachment for couples who grew up hearing that homosexuality was wrong can be even more difficult. That difficulty should be made explicit. As one of the video’s featured counselors quips, counselors working with same-sex couples need to talk about the “pink elephant” in the room.

Even profoundly, the video addresses a common stereotype about same-sex relationships, namely that monogamy is rare in homosexual relationships, which the counselors report is not necessarily true. The need for connection is universal, and now gay and lesbian couples are entering into more traditional forms of relationship (e.g., marriage) than ever before. The video features one couple who have an open relationship, but as the featured counselors say, that arrangement is not necessarily contraindicative of EFT (active affairs outside the “rules” of the relationship are, however). Counselors working with gay and lesbian couples must look beyond the particulars of the relationship (e.g., monogamous, open) to examine the bond between partners. What matters is strengthening the bond. Ultimately, partners want their emotions to be understood, and EFT helps couples reach that goal. This video is highly recommended.

Available in DVD and streaming format as part of video subscription at Psychotherapy.net/subscriptions.