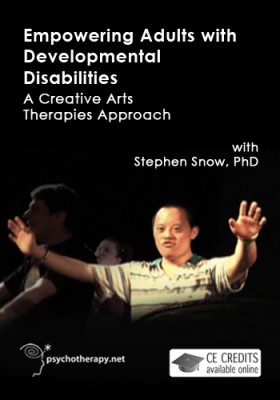 Empowering Adults with Developmental Disabilities: A Creative Arts Therapies Approachwith Steven Snow, PhD is a 42-minute video that focuses on the experiences of a group of people with developmental disabilities at The Centre for the Arts in Human Development at Concordia University. The video is broken up into two sections: “In Their Own Voices” and “Epilogue.”

The first part of the video, “In Their Own Voices,” focuses on a 3-year study Dr. Snow and his colleagues conducted at The Centre for the Arts in Human Development at Concordia University. The study focused on using a form of ethnodramatherapy called “Playback Theater” with adults with developmental disabilities. Playback theater occurs when one of the participants tells a story about something that has happened in his or her life and other participants act out that anecdote. For example, a participant named Angela relates the story of when she went to the bathroom in school and two girls made fun of her. When she went to tell her teacher, her teacher said that she was making up a lie. As part of playback theater, other project participants act out Angela’s story in the form of a skit. In addition, participants perform another skit about living in a world where name calling is against the law. Some participants note that they are uncomfortable repeating negative names in the play because they are names that others have called them.

The video narrator emphasizes that it is important to follow up with participants who have told their stories to see whether the skits have accurately reflected their narratives. This follow-up can occur in the form of processing feelings in a group setting or using art therapy. At one point, Dr. Snow brings in art therapists to help participants convey their thoughts and feelings through artwork. One participant is described as someone who does not speak often, but is shown expressing herself on stage through the use of finger painting. Participants also are encouraged to express themselves through dance with the help of dance movement coaches and dance therapy. The video discusses the definition of the word “stigma” and how people with disabilities face stigma in their daily lives. Some participants describe frustrations with being unable to do things other people are able to do such as catch the city bus on their own. The first section of the video concludes with the participants putting on a play for the community in which they incorporate everything they have learned from participating in the project.

The second section of the video, titled “Epilogue,” gives more in-depth information about the concept of ethnodramatherapy and how Dr. Snow and his colleagues have used this therapy with program participants. Dr. Snow discusses how to incorporate expressive and performance art into work with adults with developmental disabilities to help them to cope with issues of daily living. He reports that the research team has conducted participant interviews as a way of collecting qualitative data to measure the therapeutic impact of ethnodramatherapy.

This video would be appropriate for graduate students in counseling, especially those studying rehabilitation counseling, to understand the unique experiences of adults with developmental disabilities and how counseling can be more than just talk therapy. This video also would be an excellent resource for current practitioners who are looking for more creative ways to work with adults with specials needs. Introductory counseling students may have trouble following the Epilogue, as it focuses heavily on the methodology used by the research team during the project. However, counselor educators will find this section interesting when considering more creative ways to measure therapeutic outcomes and impact from a qualitative perspective. Overall, this video helps all audiences to remember what one participant boldly stated: “Labels don’t belong to anyone. Labels belong on jars.”

Available in DVD and streaming format as part of video subscription at Psychotherapy.net/subscriptions.