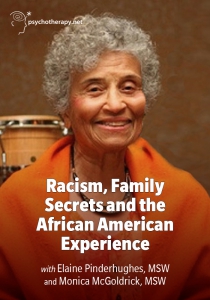 In the African American community, there is a theme of pain and hurt that is often hidden behind family secrets. These family secrets are deeply rooted in the African American experience of slavery and racism that is carried throughout generations. In her 35-minute interview with Monica McGoldrick, MA, LCSW, PhD (honorary), Elaine Pinderhughes, MSW, provides a comprehensive and in-depth narrative about her family heritage, supported by 30 years of research on her family’s genealogy. After the death of her father in 1976 and inspired by Alex Haley’s book entitled Roots, Pinderhughes set out to explore her own family’s roots. This video provides viewers with a glimpse into Pinderhughes’s family’s history, their secrets, and the truth that she discovered.

A strength in this video was the consistent use of a genogram that highlighted Pinderhughes’s family tree. Genograms may serve as useful tools for counselors working with African American clients and for gathering family history information during the assessment phase. On the genogram, her paternal and maternal family are identified. Pinderhughes provides a brief summary of her paternal family’s education and accomplishments, and she describes the type of community that her father grew up in; however, because of the lack of information available because of slavery, Pinderhughes was unable to research her paternal family prior to 1870.

Pinderhughes then discusses her maternal family history. She explains that her mother died when she was 16 years old, and during the video, Pinderhughes recounts her experience of growing up with a mother whom she describes as an extremely fair-skinned Black woman, who was often mistaken for White by both Black and White people. Pinderhughes reports that her mother never spoke about her biological father, and she also discusses the challenges that she experienced when attempting to obtain information about her mother’s paternity from her maternal relatives. Pinderhughes’s research revealed a shocking family secret: Her mother’s father was a White sheriff from her mother’s town, and she believes that her mother was born as a result of rape. She identifies other mixed-race maternal relatives on her genogram, who she also believes were born as a result of rape. The information provided in this part of the video reveals the hidden historical truth about the sexual abuse of Black women. Because of the pain associated with this knowledge, this information also provides insight into why Pinderhughes’s family chose to hide this secret for so long.

Within the video, Pinderhughes also broaches the salient topic of skin color, which remains a sensitive subject among African Americans. Pinderhughes is very transparent in providing the viewer with several poignant examples of her own experiences with skin color. In one example, she describes feeling like she did not “belong” to her mother, because her mother looked White and Pinderhughes did not. She then goes on to discuss an incident where she was lectured by her father for using the term dark-skinned when describing another girl. This causes her to reflect on the challenges that she experienced with having a mother who looked White and a father who looked African, and not being able to speak about skin color within her household. A final example that she provides is an internal conflict that she felt toward her paternal aunt, who came to care for her after her mother’s death, and whom she characterizes as a loving individual, yet one that looked similar to “Aunt Jemima” in her perspective. She discussed feeling ashamed of her aunt’s appearance and the dichotomy of having a mother who looked White and an aunt who looked the opposite. She discussed coming to terms with those feelings of shame around 4 months prior to this video recording and “weeping” because of it.

Elaine Pinderhughes’s transparency is both courageous and inspiring, and her family’s narrative is reflective of the African American experience. The secrets that are maintained within these families as a result of racism have the ability to do harm to each generation. Counselors-in-training and professional counselors will benefit from watching this video to gain an understanding about the historical layers of pain often carried by African Americans. The Multicultural and Social Justice Counseling Competencies encourage counselors to explore the client’s worldview as well as obtain knowledge about the client’s history (Ratts et al., 2016). This video would be valuable to utilize in courses for both multicultural counseling and marriage and family counseling.