Statistics plays an integral role in graduate programs. However, numerous intra- and interpersonal factors may lead to successful completion of needed coursework in this area. The authors examined the extent of the relationship between self-efficacy to learn statistics and statistics anxiety, attitude towards statistics, and social support of 166 graduate students enrolled in master’s and doctoral programs within colleges of education. Results indicated that statistics anxiety and attitude towards statistics were statistically significant predictors of self-efficacy to learn statistics, yet social support was not a statistically significant predictor of self-efficacy. Insight into how this population responds to statistics courses and implications for educators as well as students are presented.

More graduate programs in various social science fields are requiring students to complete research methods including statistics courses or a blended combination thereof (Davis, 2003; Schau, Stevens, Dauphinee, & Del Vecchio, 1995). These course requirements pose a dilemma for educators and students because many students perceive statistics as difficult and unpleasant (Berk & Nanda, 1998). Some students can struggle in statistics courses as a related complication of this perception as well as other intrapersonal factors related to the course.

To investigate graduate students’ experiences in statistics courses, researchers studied different avenues to understand what occurs with students so steps can be taken to improve learning as well as satisfaction in college statistics courses. For instance, researchers suggested non-cognitive factors such as motivation for further learning (Gal & Ginsburg, 1994; Finney & Schraw, 2003), statistics self-efficacy (Onwuegbuzie & Wilson, 2003), and attitude toward statistics (Araki & Schultz, 1995; Elmore, Lewis, & Bay, 1993; Waters, Martelli, Zakrajsek & Popovich, 1988; Wise, 1985) should be assessed and addressed with students. Finney and Schraw theorized that the difficulty students experience with statistics is not necessarily due to lack of intelligence or poor aptitude, but may be a result of the above mentioned factors. Bonilla (1997), Cohen and McKay (1984), and Solberg and Villarreal (1997) hypothesized that social support may act as a buffer against the development of these psychological manifestations.

Dispositional antecedents are intrapersonal factors students bring to the classroom (Onwuegbuzie & Daly, 1999), which includes issues such as perfectionism and perception of abilities at developmental stages in life (Pan & Tang, 2004). Walsh and Ugumba-Agwunobi (2002) found evaluation concern, fear of failure, and perfectionism provoked statistics anxiety. Environmental antecedents are interpersonal factors related to the classroom experience (Onwuegbuzie & Daly, 1999), which can include the student’s experiences with the professor. Tomazie and Katz (1988) reported previous experiences in statistics courses have influenced learning in a current course. Moreover, the environmental antecedent has the least research available in the literature.

Perceived social support is the final independent variable in this study. Perceived social support for this study is defined as the level of support an individual self identifies as received from friends, family, and significant others (Zimet, Dahlem, Zimet, & Farley, 1988). This variable is influential in this study in terms of the potential buffering effect it may have on the other independent variables, statistics anxiety and attitude towards statistics.

According to Bonilla (1997), social support acts as a buffer to dysfunctional thoughts or attitudes. In 1985, Cohen and Wills investigated the process through which social support has a beneficial effect on well-being. The buffering model maintains that support is related to well-being primarily for persons under stress. Cohen and Wills identified four support resources, which include the following: (a) esteem support such as the person is valued and accepted, (b) informational support, (c) social companionship such as engaging in leisurely activities with others, and (d) instrumental support such as an individual providing a person with financial aid, material resources, or need-based services.

Participants
Participants were recruited by the researcher emailing faculty members of doctoral and master’s programs within colleges of education at 250 universities within the United States. The faculty members were asked to forward information about the opportunity to participate in the study to their students. One hundred sixty-six graduate students within colleges of education representing 27 states fully completed the online survey within the 8-week data collection timeframe. An a priori power analysis was conducted considering involvement of three predictors in the multiple regression equation and estimating a moderate effect size based on similar studies. It was determined that 119 participants are needed to achieve adequate power in the study (Faul, 2006); thus, an appropriate sample size was achieved to obtain adequate power in the analysis (Gall et al., 2007).

Instruments
A demographic questionnaire was used to collect information related to participants’ personal characteristics as well as previous experiences with graduate statistics classes. The Self-Efficacy to Learn Statistics (SELS) scale was used to measure the dependent variable (Finney & Schraw, 2003). The SELS measures confidence in one’s ability to learn necessary statistics while in a statistics course in order to successfully complete 14 specific tasks using a 1 (no confidence at all) to a 6 (complete confidence) response scale. Only a total score is obtained from the instrument. Internal consistency reliability was reported as .975 Cronbach’s alpha. Validity evidence of SELS to other variables was reported. The SELS was positively correlated with the Math Self-Efficacy scale and negatively correlated to the general and statistics Test Anxiety Inventory subscale providing evidence of concurrent validity. The norm group for the instrument was a total of 154 college students enrolled in an introductory statistical methods course.

The third independent variable, social support, was measured by the Multidimensional Scale of Perceived Social Support (MSPSS) (Zimet, Powell, Farley, Werkman, & Berkoff, 1990). The instrument has 12 items and utilized a 7-point Likert scale ranging from very strongly disagree to very strongly agree. A total score and three subscale scores (support from significant others, support from family, and support from friends) were obtained. The instrument was reported as reliable with Cronbach’s alpha coefficients reported as .85 to .91 for the three subscales. Test-retest values ranges from .72 to .85. Zimet et al. reported significant correlations between the MSPSS subscales and the Depression and Anxiety subscales of the Hopkins Symptom Checklist as evidence of construct validity for their instrument. The norm group consisted for 275 university students at Duke University.
Data Analysis
A simultaneous multiple regression was analyzed to determine the extent of the relationship between graduate students’ self-efficacy to learn statistics and statistics anxiety, attitude towards statistics, and social support. Alpha level was set at .05 for the analysis and semipartial correlation coefficients were assessed for practical significance. The multiple regression was repeated, removing social support from the analysis to explore any moderating effects of social support on the model. 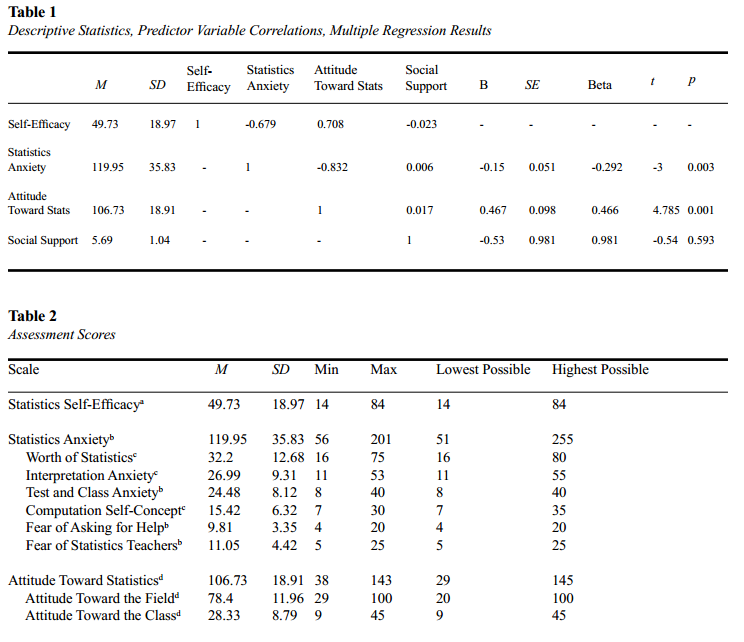 This study sought to explore the relationships of graduate students’ self-efficacy to learn statistics, statistical anxiety, attitudes towards statistics, and social support. The scores from the various instruments identifying each of the aforementioned variables produced both negative and positive correlations among each other. A statistically significant relationship was found among self-efficacy and statistical anxiety, attitudes towards statistics and social support indicating the importance of the graduate students’ belief in their competence of facing the challenges of learning statistics. However, there was no change in the relationship when social support was removed from the analysis; thus, it was not a contributing variable. Statistics self-efficacy scores from participants indicated moderate responses which mirrored the prior studies involving undergraduate students (Pajares, 1996; Zimmerman, 2000). As this was the first study that investigated graduate students, these results create a path for future research.

Participants reported a high level of social support, which indicates that most of the graduate students believed they had adequate support. The sample perceived social support as an influential factor in their lives, which is similar to most college student population reports (Solberg & Villarreal, 1997). However, social support was not a statistically significant predictor of self-efficacy to learn statistics. Also, when this variable was removed from the multiple regression analysis, there was no statistical or practical change in the regression. The insignificant result implies that social support was present for students, but it did not interact as a buffer between variables and possibly decrease anxiety or increase positive attitudes as indicated by Bonilla (1997), Cohen and McKay (1984), and Solberg and Villarreal (1997). Thus, social support may possibly help one cope but not necessarily remove the problem, change attitudes, or change thinking.

Multicollinearity between statistics anxiety and attitude toward statistics suggests an interrelationship between the two variables (Gall et al., 2007). Both variables may be measuring the relatively same characteristic; thus, neither variable may have brought something completely new to the analysis. It is interesting to note that statistics anxiety and attitude toward statistics as measured by the instruments in this particular study may be focusing on the same phenomenon.

Limitations of the Study

There were limitations to this study. For instance, graduate students in counseling and education related programs were recruited for the study; thus, due to the general nature of the population, there were a disproportionate number of females and Caucasian students in the sample. As a result, a diverse sample was not obtained. However, a representative sample was acquired. Also, there were four scales for participants to answer in the study, therefore putting a time constraint burden on students to finish the instruments. Finally, these instruments were self-reporting, which can promote bias in how the graduate students answered (Gall et al., 2007).

Future research should expand investigations into statistics self-efficacy predictor variables that include number of statistics courses taken, previous statistics experience, and broad demographics of graduate students to include more participants representing the various races and ethnicities, marital status, and life experiences. Longitudinal studies to monitor how statistics self-efficacy changes for graduate students over time would provide a snapshot of the development of attitudes throughout their graduate study tenure. Experimental designs to assess classroom and counseling based intervention effectiveness in reducing anxiety and improving attitudes should be conducted to improve the reliability of students learning statistics and influence the participation of conducting their own research for the betterment of the counseling profession. Finally, qualitative studies need to be conducted to better capture students’ experiences in statistics classes.